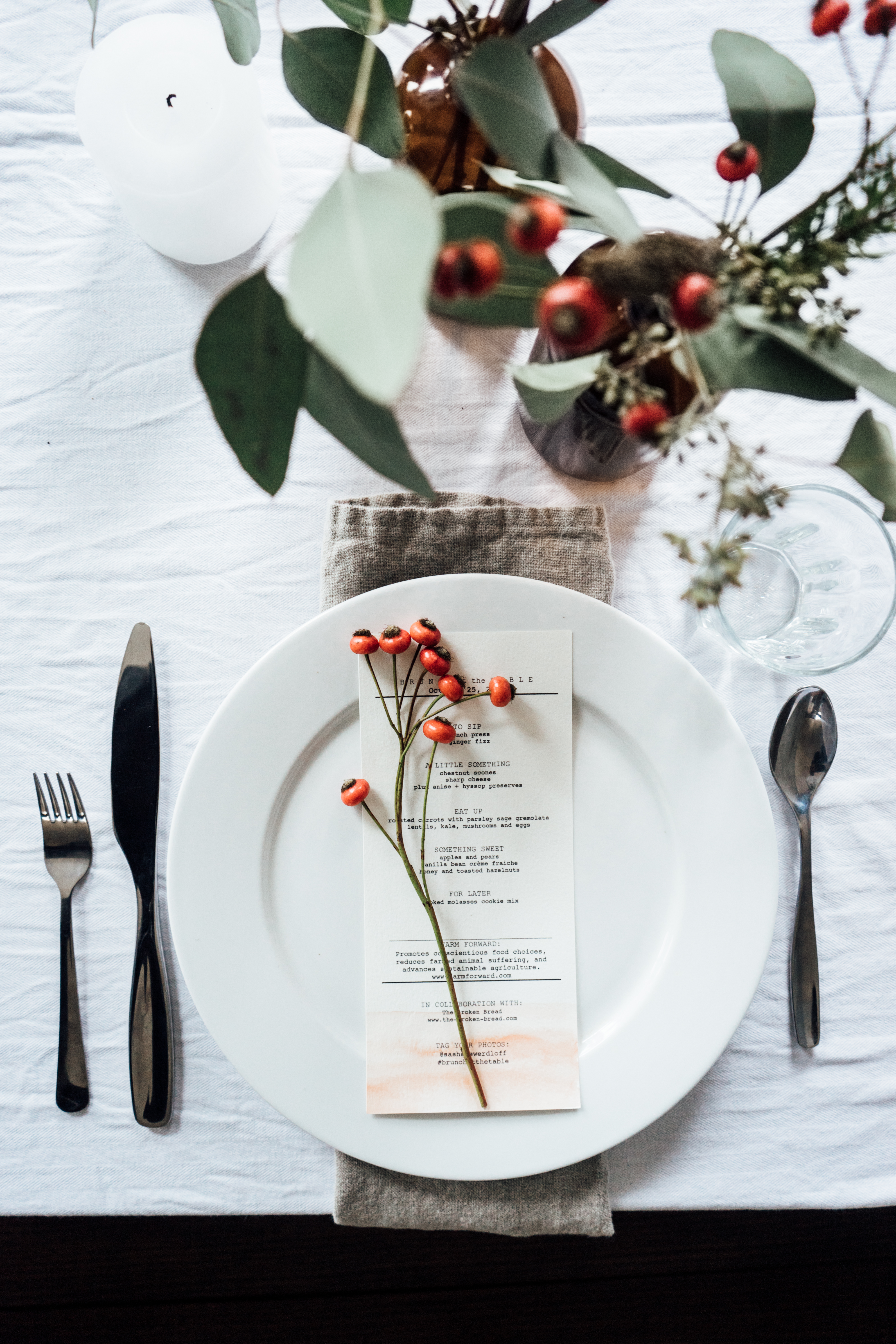 First off, I wanted to say thank you for the overwhelming support and kindess that I received from all of you regarding my last post. It really means a lot to know that I can be vulnerable and honest. I’d also like to thank you for being patient with me as I gradually get back into my routine. I’m painfully aware of the fact that my posts have been less consistent recently. So thank you for bearing with me. I’ve got some new recipes and photos coming your way soon. For now I wanted to tell you a little about our most recent benefit brunch and share with you my thoughts on eating sustainably. 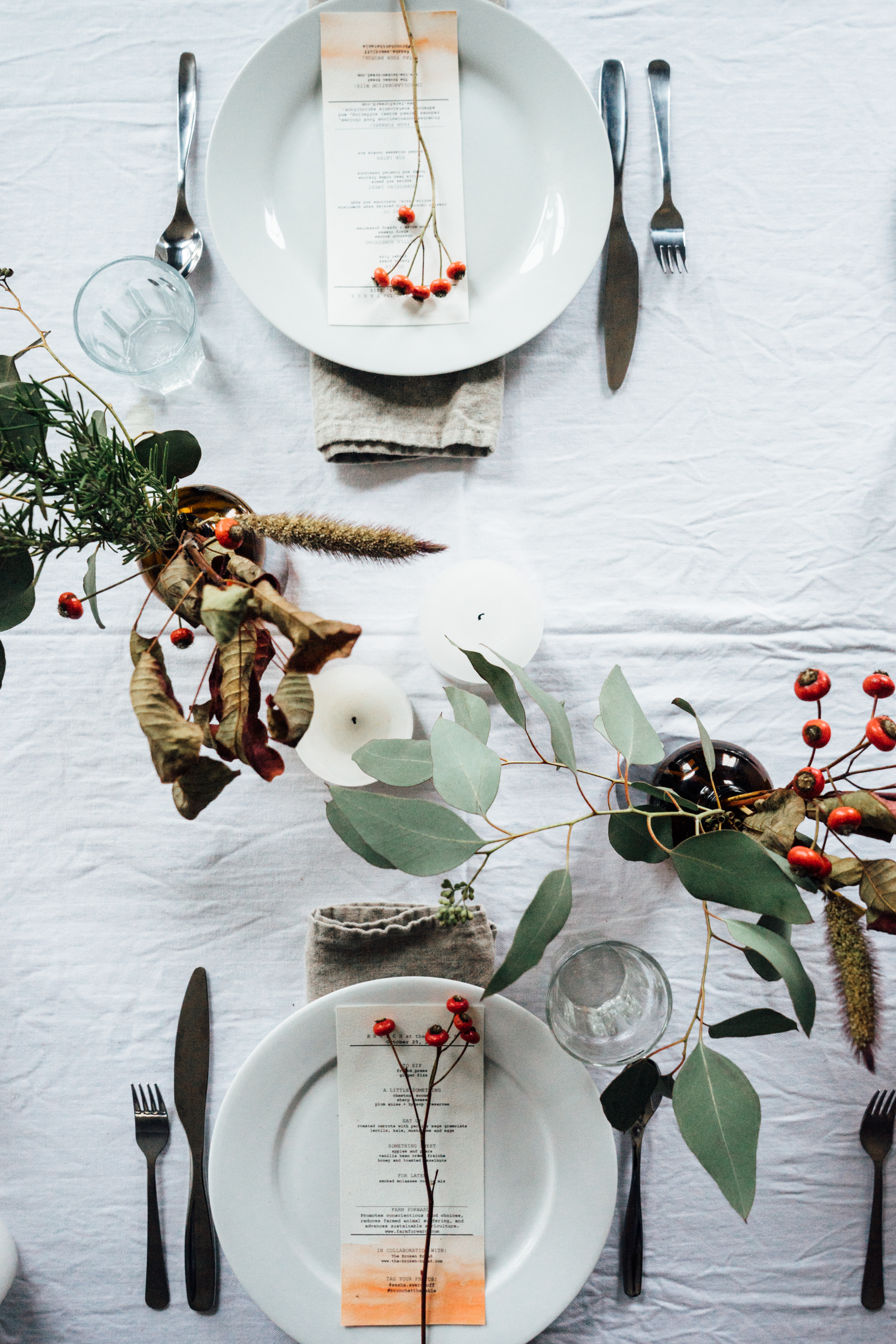 On Sunday, Kristan Raines and I hosted a benefit brunch in support of Farm Forward, a non-profit working to raise awareness about the environmental and ethical impacts of factory farming. In addition, Farm Forward works to promote new strategies to create a more healthy, just and humane food system. From what I can tell, there aren’t many non-profits working in this area despite the devastating environmental impacts, the animal cruelty issues, the brutal working conditions and the health concerns associated with livestock production and dairy farming.

I’ve always believed that our choices surrounding food are some of the most impactful choices we make. How and what we eat not only impact our health, but impact the health of the planet. I recently watched Cowspiracy which provides some staggering statistics about the environmental consequences of livestock production. As a result I’ve come to some new (and old) conclusions about my food philosophy that I wanted to share with you.

Eat personally: One way of eating isn’t necessarily right for everyone. The Ayurvedic approach to eating for your unique constitution really resonates with me.

Buy organic when possible: Don’t rely on the label. Many farms can’t afford to become certified organic, but still use sustainable farming methods. Avoid foods farmed using synthetic pesticides and herbicides as they are harmful to your health and the soil and water.

Eat raw, local honey: Fruit trees and other plants rely on bees for pollination so it’s important to support your local apiaries.

Eggs: I don’t have a problem with eggs from small, local farms who raise their hens on pasture and supplement with feed from local farms. I’d rather not support the large scale production of corn, soy and wheat for animal feed and avoid eggs laid by hens whose feed contains fish meal as it is often unsustainably caught and contributes to the decline of ocean health.

Dairy: Avoid dairy, especially from cows and other ruminants as they require enormous amounts of grain and water and produce copious amounts of methane. Livestock also take up large tracts of otherwise wild land resulting in the decline of wild predators when ranchers feel that their herds are threatened.

Meat and seafood: Avoid meat and seafood. If I can’t kill it I don’t want to eat it. Not only is red meat inflammatory and hard to digest, but new research shows that it is also possibly linked to an increased risk of cancer. As for pork, I’m troubled by the research that shows that pigs are as intelligent as dogs. Most seafood is overfished to the point where it will take years to reestablish healthy numbers. In addition, most commercial fishing methods result in damage to reefs and other species. Human rights violations are associated with shrimp fishing in Thailand and Southeast Asia.

Soy and palm oil: I avoid these two mainly because their production is a leading cause of deforestation and habitat destruction.

So, there you have it. I know it’s a lot to take in and want to emphasize that these are my opinions and while I’ve done some reading and research I definitely don’t have all the facts. My goal is simply to raise awareness about the issues in our food system with the hope that consumer demand will shift leading to healthier humans and a healthier planet.

Last but not least, thank you to all the wonderful sponsors who helped make this brunch possible. These producers and farmers are all doing great things!

|organic, non-GMO, heirloom wheat varieties, grown, milled and ground to order insuring the sustained health of the soil and a nutrient dense product|

|made with local, non-GMO ingredients|

4 thoughts on “A Brunch Recap and My Food Philosophy”